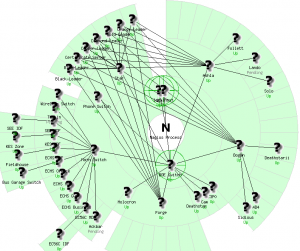 Technology in our Schools

In Edmonson County Schools the technology department has taken a lot of time to develop a school network that is capable of expanding with the growth of the schools as well as with the growth of technology use in the classrooms. We have implemented and maintained an all fiber-optic network inside the county, which connects every school together via gigabit or ten gigabit fiber-optic links. This has moved the school from its previous state of being several separate networks each connected with very small bandwidth links, to a more unified network that is actually a district wide network. With the almost limitless bandwidth the fiber network gives us, we have moved servers, and workstation administration to a central location. We have also consolidated several servers down to only a few virtual servers with more specific tasks.

We have completed the process of migrating all our computers to Windows 7. Computers that were not fast enough to make this migration were either turned into terminals or parted out and sold at public auction. We are happy to note that less than four percent of the computers that were on the network before the migration were sold as unusable. Currently our network has over eight hundred active computers. It also contains over one hundred printers and switches. With the addition of PDAs, servers, routers and uninterruptible power supplies, it contains over a thousand devices.
All of these advances have been accomplished while maintaining the operating status of the network and causing no major downtime for enhancement and upgrade. The design for the network was done entirely in house and the implementation of the networking was also done by the district techs. Edmonson County Schools currently operates using two on staff technicians. This results in a support staff ratio of over 500 to 1, in a field where the accepted value is 125 to 1.

Utilizing a Variety of Technologies

Inside the network in Edmonson County we attempt to utilize several types of technology. Our desktops and servers are not just limited to Windows operating systems, but we also use Linux in several of our day to day operations. Using Linux on our backup server has allowed us to develop our own backup technology. This system allows for automated backups on a four hour time cycle with complete file systems. No incremental or tapes needed. We also utilize Voice over IP technolgy to allow for people to talk across the network without tying up phone lines. We have implemented Linux as a terminal client connecting to a Windows terminal server, thus saving the district on licensing cost for Windows on the desktop.